Cancer from a Grand Daughter’s Perspective 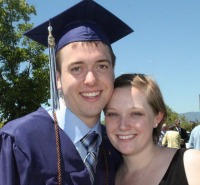 According to the 2015 Cancer Facts & Figures, published by the American Cancer Society yearly, “Nearly 14.5 million Americans with a history of cancer were alive on January 1, 2014.”[1] To put that number in perspective, the US government estimates the current population to be roughly 320,708,000 – though that number is increasing steadily.[2] This means that about 22% of the current US population, or 1 in every 5 individuals, is either undergoing treatment for cancer, or is a survivor of cancer.

This 1 in 5 hits very close to home for me, as my mother is a survivor of skin cancer, and after years of fighting and countless health complications as a result, my grandmother died from breast cancer. Most people have a similar story – with one in five individuals being diagnosed, most people have a friend or family member who is fighting, or has fought, cancer.

These numbers are admittedly a bit scary, but also a call to arms. If 1 in 5 of my friends, of my family members, of my workmates, are going to get cancer, I want to know that we’ve done everything we can, that I’ve done everything I can, to support research, which is making quantifiable improvements in survival rates with every year.

For more information, and to read the impressively thorough 2015 Cancer Facts & Figures, I highly recommend checking out www.cancer.org, home of the American Cancer Society.