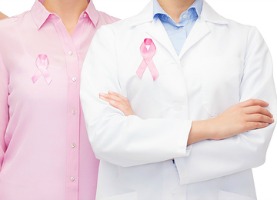 [UPDATED January 2016 – See Below] How a personal phone call from Dr. Richard Wender, Chief Cancer Control Officer for the American Cancer Society, changed my view on the New Breast Cancer Screening Guidelines.They are better than I thought, and better than the media is portraying!

I felt that young women’s lives no longer mattered! Like many others, I took to social media and shared my heartbreak with my friends and others in the cancer community. I thought that MY American Cancer Society had let me down; the truth is the exact opposite.

This evening, Dr. Richard Wender, Chief Cancer Control Officer for the American Cancer Society, took time out of his busy schedule to personally call me, yes ME! Dr. Wender spent 40 minutes answering any and all of my questions, no matter how challenging, and he explained in detail precisely what the new guidelines mean.

Here is a recap of our discussion from what I thought the breast cancer screening guidelines said translated into what the guidelines actually mean for women moving forward. It is so much better than I originally thought.

• Women ages 45 to 54 should start getting annual mammograms.

The news media made it sound as though women ages 40 to 44 NO longer needed mammograms. What about the lives that would be lost? Would insurance companies pay for mammograms for women younger than 45?

Women ages 40 to 44 have the CHOICE to start annual breast cancer screening with mammograms!

Women are now being given the power to take control of their own healthcare. We are encouraged to have those important discussions with our doctors and decide if it’s right for us to have an annual mammogram. Your doctor should explain the risk of waiting until you are 45 before you start having annual mammograms. If you want my opinion, get a mammogram starting at age 40, even if you are healthy. I was, with no family history, check that box too.

The truth of the matter is that the risk for developing breast cancer is almost the same for a 39-year-old woman as it is for a 40-year-old, yet people aren’t up in arms because the previous guidelines suggested that women start having their annual mammograms at 40. Once a woman reaches the age of 43 – 45, the risk starts to increase. The percentage risk for developing breast cancer goes up between 49 years of age and 50, not between 39 and 40. Interesting statistic!

Dr. Wender mentioned that even with today’s guidelines many women don’t go in for their annual mammogram. I was one of those women. I didn’t have a regular physician and it had been 5 years since my last mammogram! Breast cancer taught me a valuable lesson.

Here is the currently available data: 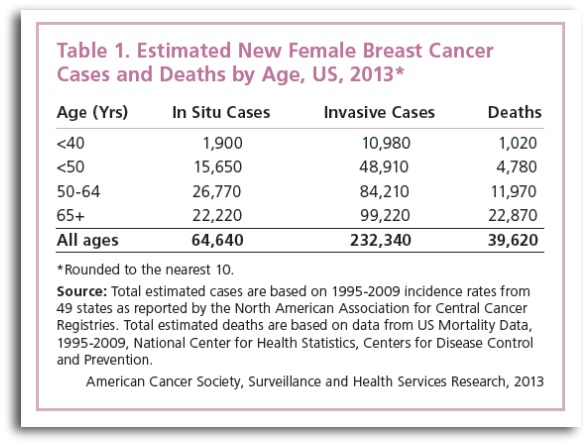 In situ – abnormal cells have not grown beyond the layer of cells where they originated. In Heidi Speak – the cells have not broken through the cell wall and are still contained within the breast ducts.

Invasive – (most cancers are invasive) these cancers have broken through the ductal or glandular walls where they originated and grow into surrounding breast tissue.

The question about insurance companies using the guideline as a reason to no longer cover mammograms in younger women, this is my personal opinion, post op, my insurance company rejected my double mastectomy several times! I had 3 of the possible 7 breast cancers! They don’t need a guideline to refuse to pay for medical treatment, but that’s an entirely different subject. 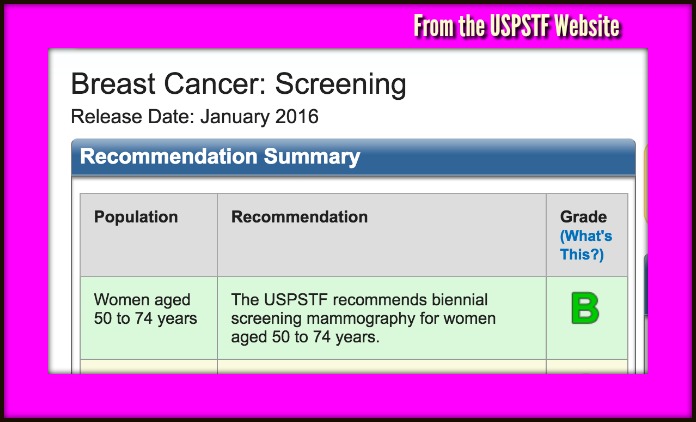 “For women who are at average risk for breast cancer, most of the benefit of mammography results from biennial screening during ages 50 to 74 years.

“Congress used the recommendations of several organizations, including the Task Force, to create a base level of coverage for preventive services under the Affordable Care Act (ACA).”

• Breast exams, either from a medical provider or self-exams, are no longer recommended

This made no sense whatsoever. This was one point that put me over the edge. Why discourage women and doctors from doing breast exams?

Breast exams, either by medical providers or via self-exams, are not discouraged. They are just not recommended.

A mammogram will discover a malignant growth long before a woman doing a self-exam or a medical provider could feel something. In my personal case, I didn’t have the type of malignant growths that could be felt by a self-exam. This doesn’t mean that your doctor will stop doing a breast exam. What it means is that it is not accurate, and it could give women a false sense of security. You still need to get your MAMMOGRAM…starting at age 40! It is like having a broken leg. In most cases your doctor would require that you get an x-ray. Same difference!

Also, women younger than age 40 have denser breast tissue and it is more difficult to feel a lump. I am not referring to actual “dense breast” which again can only be determined by a mammogram. The best way that I can describe “dense breast” is when looking at breast tissue with traditional mammography. Dense breast tissue is white and a tumor is white so it is a little like finding a polar bear in a snowstorm.

If you have been diagnosed with dense breast, at least here in California, you are required by law to be offered additional screening options such as ultrasound or MRI. My invasive breast cancer was not caught by traditional mammography because I had dense breast, yet my surgeon required that I have a breast MRI prior to surgery and I’m so glad he did.

Having a guideline or a list of recommendations won’t save your life. It is the implementation of those guidelines and becoming an active partner in your own personal health! Having an astute doctor who you trust to advise you about risk and benefits of various tests and medical procedures could save your life.

• Women should continue screening mammography as long as their overall health is good and they have a life expectancy of 10 years or longer.

I thought this was a little odd so I asked Dr. Wender about it. It turns out this was part of the 2003 guidelines. He started explaining about actuarial life tables and then shared a story (paraphrased).

There was an older female patient, I believe in her 80’s, with emphysema on oxygen. She mentioned that it was time for her mammogram. When told that she didn’t need one the difficult discussion started.

If your life expectancy is less than 10 years, then even if breast cancer is diagnosed, treating it isn’t advisable. As one who went through it, there are reasons why breast cancer survivors are referred to as strong. It is not for wimps!

• One of the biggest questions that kept coming up between myself and others regarding the new guidelines was, Are the NEW breast cancer screening guidelines being driven by the insurance industry and their desire to reduce the expense of unnecessary biopsies and tests?

On this point, Dr. Wender was crystal clear! 100% unequivocally, the insurance industry had no involvement in these guidelines!!!

So What Does This ALL Mean to YOU and Why Do You Care?
Here it is from my perspective. Watch the video first with your eyes, ears and MIND wide open!

The American Cancer Society was the convener of the group of dedicated physicians all noted in the cancer community who authored these guidelines.

The American Cancer Society did not have a say in the timing of the announcement.

JAMA, the Journal of the American Medical Association, published the guidelines and also determined the timing of the announcement.

I personally doubt that the American Cancer Society would have chosen to release this type of information during Making Strides Against Breast Cancer, one of the busiest times of the year, at least for breast cancer survivors and their supporters!

These guidelines were the first review under the new formula for revised review, and I’m sure a great deal was learned in the process.

Cancer, breast cancer, in particular, is something that I am personally very passionate about. It is something that rocked my world and that of my family. When I saw the guideline, I didn’t READ what it said with an open mind. My friends are dying of this terrible disease. When I saw “mammograms starting at 45,” I thought of all of the women who are battling cancer at an early age and dying before their time.

Intellectually I understand that the American Cancer Society would have lost credibility with the scientific community had they gone against the data and continued on with the old guidelines. The data doesn’t substantiate the old guidelines. One size fits all guidelines just are not prudent.

Dr. Wender spent his day, October 21st, in countless meetings and on the phone with heads of major medical centers and with noted surgeons. The fact that he took 40 minutes out of his evening to speak with me, a breast cancer survivor, and a Making Strides Against Breast Cancer volunteer, shows me just how important we all are to the American Cancer Society! These guidelines were put in place to save lives because of early detection, yet as I said earlier, they only work if women see their doctors and get their annual mammograms!

The views expressed are my own personal views and are not endorsed by the American Cancer Society.